The Court of the Lord Lyon (the Lyon Court) is a standing court of law which regulates heraldry in Scotland. The Lyon Court maintains the register of grants of arms, known as the Public Register of All Arms and Bearings in Scotland, as well as records of genealogies.

The Lyon Court is a public body headed by the Lord Lyon King of Arms (the Lord Lyon), who must be legally qualified, as the Lord Lyon has criminal jurisdiction in heraldic matters, and the court is fully integrated into the Scottish legal system, including having a dedicated prosecutor, known in Scotland as a procurator fiscal.

Its equivalent in England, Wales, and Northern Ireland, in terms of awarding arms, is the College of Arms, which is a royal corporation and not a court of law. The High Court of Chivalry is a civil court in England and Wales with jurisdiction over cases dealing with heraldry.

An Act of the Scottish Parliament of 1592 gave the Lord Lyon responsibility for prosecuting as a criminal offence anyone who uses unauthorised Arms. The Court has its own Procurator Fiscal, an independent official prosecutor.

In 1672 a further Act of the Scottish Parliament authorised the creation of the Public Register of All Arms and Bearings in Scotland which is maintained by the Lyon Clerk and Keeper of the Records. The Register contains an official copy of every Coat of Arms granted in Scotland since 1672.

The origin of the Coat of Arms was a jacket or tabard worn by a mediaeval Knight over his armour in order to identify himself. Nowadays the expression “Coat of Arms” is generally applied to what is officially called an “achievement”, which consists of various parts: a shield, helmet, mantling, wreath, crest, motto and sometimes supporters and decorations.

There is a widespread misconception that a family or a clan can have a family or clan Coat of Arms. Many heraldic and clan web sites and other media suggest that a person has the right to use the family or clan Arms. This is completely incorrect.

A Coat of Arms belongs only to one individual person and can only be used by that person and no one else.

What is permitted is for a member of a clan to use the clan crest. Usually what is referred to as the clan Coat of Arms is in fact the personal Arms of the Chief of the Clan which can only be used by that Chief. 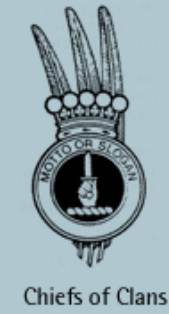 Chiefs have the right to wear their Crests as badges – Either simpliciter, without the accompaniment of circlet, motto or feathers behind the badge; or, as is more usual, surrounded with a plain circlet inscribed with his Motto, not a strap-and buckle which is for clansmen; and, if they choose, with three eagle’s feathers in silver behind the circlet. 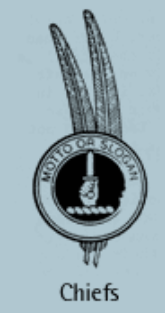 Heads of large branches of a Clan, who have been Officially Recognised as Chiefs by the Lord Lyon King of Arms, may wear – Either their own personal Crest within a plain circlet

inscribed with the Motto, as for a Chief of Clan, but with two small eagles’ feathers instead of the Chief of Clan’s three.  If the Chieftain is also a Peer, he may add the appropriate coronet of rank on top of the circlet, or they may wear their Chief’s Crest badge without feather like any other clansman, as described for clansmen, below. 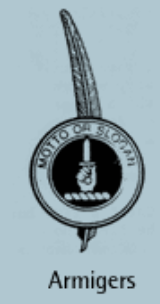 A person who has registered his or her own coat of Arms and Crest, or inherited these according to the Laws of Arms in Scotland from an ancestor who had recorded them in the Lyon Register, may wear their own Crest as a badge – Either on its Wreath, Crest Coronet or Chapeau; or, as is more usual, within a plain circlet inscribed with his Motto.

An armiger may also choose to wear instead the Crest badge of his Chief if the armiger is a clansman.  An armiger is entitled to one silver eagle’s feather behind the plain circlet, and if he is also a Peer he may add his appropriate coronet of rank on top of the circlet. 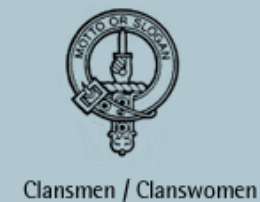 These are the Chiefs relatives, including his own immediate family and even his eldest son, and all members of the extended family called the “Clan”, whether bearing the Clan surname or that of one of its Septs; that is all those who profess allegiance to that Chief and wish to demonstrate their association with the Clan.

An example of a Clan Crest is the one which is shown in the header of this website.  This is an original Clan Crest dating from the 1800s.