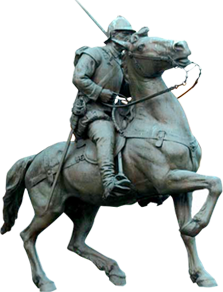 Border Reivers were raiders along the Anglo–Scottish border from the late 13th century to the end of the 16th century. Their ranks consisted of both Scottish and English families, and they raided the entire border country without regard to their victims’ nationality. Their heyday was perhaps in the last hundred years of their existence, during the Tudor dynasty (1485-1603) in England.

England and Scotland were frequently at war during the late Middle Ages. During these wars, the livelihood of the people on the borders was devastated by the contending armies. Even when the countries were not at war, tension remained high, and royal authority in one or the other kingdom was often weak. The uncertainty of existence meant that communities or peoples kindred to each other would seek security through their own strength and guile, to improve their livelihoods at their nominal enemies’ expense. Loyalty to a distant monarch and reliance on the effectiveness of the law usually made people a target for depredations rather than conferring any security.

There were other factors which promoted a predatory mode of living. Among them was the survival in the Borders of the inheritance system of gavelkind, by which estates were divided equally between all sons on a man’s death, so that people owned insufficient land to maintain themselves. Also, much of the border region is mountainous or open moorland, unsuitable for arable farming but good for grazing. Livestock was easily rustled and driven back to raiders’ territory by mounted reivers who knew the country well. The raiders also often removed “in-sight,” easily portable household goods or valuables, and took prisoners for ransom.

The attitudes of the English and Scottish governments towards the Border Clans alternated between indulgence and even encouragement, as these fierce families served as the first line of defence against invasion from the other side of the border, and draconian and indiscriminate punishment when their lawlessness became intolerable to the authorities.

The popular story handed down within reiver families is that from earliest times, reivers would visit the homesteads prior to wars or invasions and remove the cattle and items of value to a place of safety. Lords and Wardens unable to guarantee their masters’ supply lines would claim wrongdoing by ruffians and broken men. It is easy to assume that this attitude of defiance to authority would grow into outright lawlessness.

“Reive” is an early English word for “to rob”, from the Northumbrian and Scots Inglis verb “reifen” from the Old English “rēafian”, and thus related to the archaic Standard English verb “reave” (“to plunder”, “to rob”) and hence the expression “bereaved”.