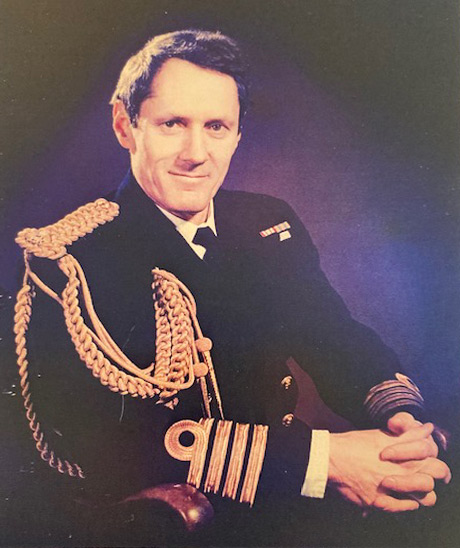 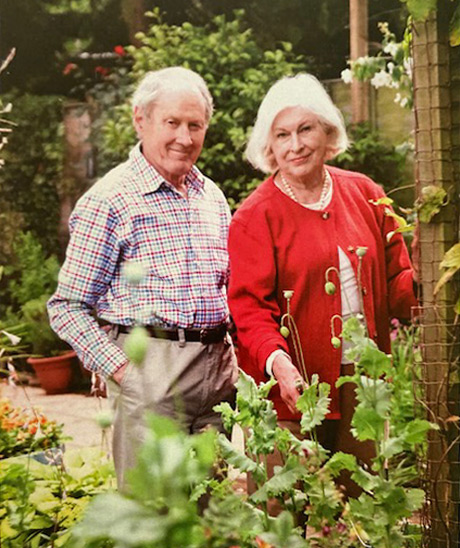 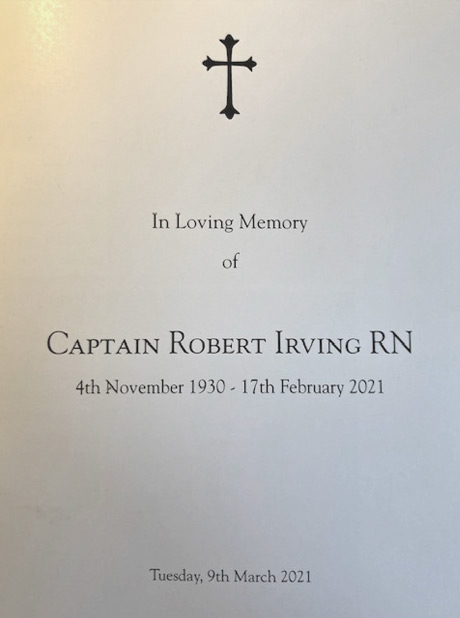 Captain Robert Irving was born in Valletta, Malta, on 4th November 1930 and revisited it 9 years later from the UK when his parents decided it was probably safer than Britain at the onset of the Second World War.

Events proved otherwise and he was evacuated with his mother and sister to Alexandria in 1941 where his father joined them after his Marlborough class warship was sunk by an Italian submarine.

His early school days at Victoria College in Alexandria clearly left traces that resurfaced later in life, an early exposure to Arabic and a fondness for animals that were different from the norm: a pet chameleon that travelled on his shoulder as a schoolboy, to a distemper-ridden stray dog that became a much-loved family pet from Portugal and later a semi-feral cat in a Somerset village. He returned to Britain towards the end of the war via an aircraft carrier, en route to the Clyde, to complete his schooling at Haileybury College in Hertfordshire.

Captain Irving’s professional life divides easily into two parts: 32 years in the British Royal Navy and 39 years as a translator of Arabic.

At 20 years old, he spent two years at sea in the Korean War, which gave him a valuable introduction to the Royal Navy.

Having always had an interest in languages he then went on to pass the Civil Service examinations in Arabic and French, qualifying in Arabic at the Middle East Centre of Arab Studies, Lebanon in 1956. This was followed by numerous sea appointments in the Arabian Gulf: including the Dhofar rebellion, the evacuation from Aden and the formal return of the Kuria Muria islands in the Indian Ocean to the Sultan of Oman. In 1958 he was in command of one of four ships of the Fishery Protection Squadron in the North Sea and Scottish waters, he arrested a Scottish trawler for illegally fishing off North Rona. This was not popular in some quarters but was met with general acclaim in Stornoway.

In succeeding years, he commanded a shore base in the UK and warships in the Arabian Gulf and West Indies.

Following this, he spent three years as Naval Attaché at the British Embassy in Cairo, at a highly politically sensitive time – between two regional wars, including attending the funeral of President Nasser of Egypt in 1970. This was succeeded by three years in charge of a department at Defence Intelligence in Whitehall, followed by six months at the NATO Defence College, Rome with his appointment as Chief of Staff at the NATO headquarters in Portugal for three years.

In short, he enjoyed a career considerably more varied than many of his naval colleagues.

Retiring from the Royal Navy in 1980, Captain Irving worked as a freelance Arabic translator for various government departments, the Serious Fraud Office, major law firms and a variety of commercial companies and individuals, covering a wide range of subject areas.

There have been highlights, for example a major criminal case that ran for several years and ended with the chief miscreants being sentenced to “245 years imprisonment followed by exile on completion of sentence”.

At the request of the Royal Botanic Garden Edinburgh, he translated their 500-page ‘Flora of South Arabia (The Plants of Dhofar: their social, economic, and medicinal uses) for the Diwan of the Royal Court, Oman, which sold widely in Arab countries. Dr Miranda Morris, one of the book’s authors, recalls that Arab scholars found it hard to believe that Captain Irving’s translation of Plants of Dhofar could have been carried out by a non-Arab, it was of such a high scientific and linguistic standard.

He was very proud to be part of this ancient Border Clan and its 19th Clan Chief which, unlike some others that were less fortunate, did not submit to the English Crown in the 16th century and has a documented history that goes back 600 years and beyond.