“My father,” Katzenstein said, “asked the train master to call the captain of the Queen Mary and tell him that four people who were held back by the Gestapo at the border. There were 1,000 people [already] on the Queen Mary. My father asked to wait until four people got there. That captain waited for six hours. He saved our lives.”

The Queen Mary was one of the ships that helped Jewish refugees flee to the U.S. before WWII. Robert Tennenbaum is seen on film aboard the ship in 1937. (US Holocaust Memorial Museum)

The little boy in the hat and overcoat and dark round sunglasses displays all the curiosity of a child about to embark on his very first oceangoing journey on a magnificent ship. His mother’s face reflects something different: their perilous flight from the Nazis and the uncertainty that would welcome them to America.

The child’s innocence and the mother’s worry were both captured on a video that Mark Tennenbaum made of his family after they boarded the RMS Queen Mary for a transatlantic passage.

“She looks so sad, and it was for a good reason,” Robert Tennenbaum recalled more than 80 years later, sitting in an armchair at his home in Columbia, Md.

He was that small boy in the dark sunglasses, clutching the hand of his mother, Earnestine, as his father filmed them.

“The bottom line was that the Queen Mary saved me and my mom and dad, saved our lives,” Tennenbaum said.

“They often left with what few possessions they could,” said Nicholas J. Evans, who lectures on diaspora history at the University of Hull. “Germany increased the costs or taxes of Jews who wished to leave. If you’d cashed in some of your belongings and had German marks on you, they would have seized them. If you had gold, or a possession visible, they would seize them.

“So, often they were actually left with the clothes that they wore,” Evans said. 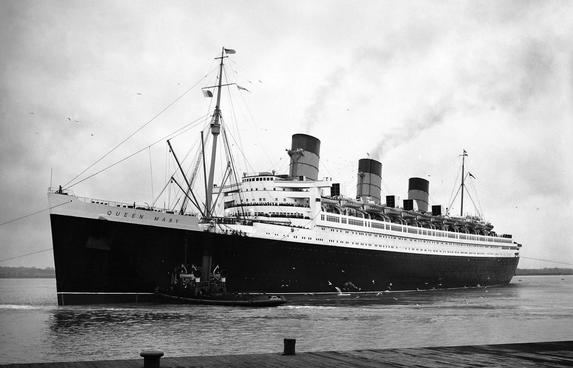 The Queen Mary is moved away from the dock by tugs at Southampton, England, on Feb. 4, 1939, as she prepares to sail to New York. (Associated Press/AP) 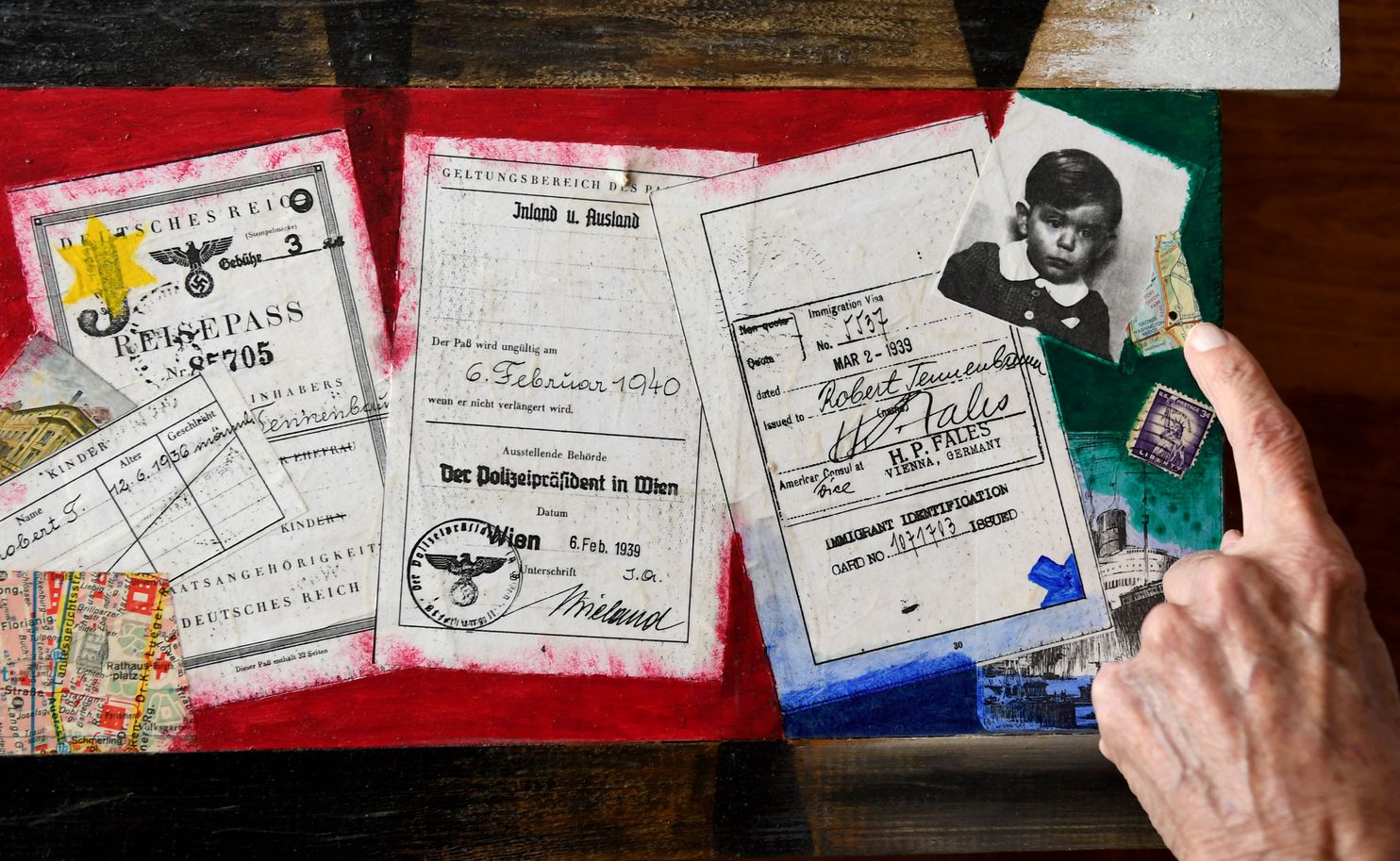 Robert Tennenbaum was 2 years old when his family fled the Nazis on the RMS Queen Mary in 1939. He shows the collage he made with his old passport and passport photo at his home in Columbia, Md. (Katherine Frey/The Washington Post)

He says there is no consensus on the number of Jewish refugees who arrived in the U.S. before the war, let alone the number who sailed to the U.S. aboard the Queen Mary or other ships of the Cunard line.

“America, like all the allies, came together after the war and said, ‘Oh, we protected the Jews. We responded to the evil of Nazism.’ But actually, they did not,” he said.

It was that Cunard-line ship that carried them in 1939 to a safe haven in New York City. The ship is now permanently moored in Long Beach, Calif., where there is an exhibition on its role in the Jews’ flight from the Nazis.

The saga of the St. Louis became the most famous example of American indifference. In 1939, the German ship set sail from Hamburg with 937 passengers, almost all of them Jews fleeing the Nazis after Kristallnacht, the Night of Broken Glass, when 267 synagogues were attacked, more than 7,000 Jewish businesses were damaged or destroyed and the roundup of some 30,000 Jews for the concentration camps began.

Most of those aboard the St. Louis had applied for visas to the United States, but the ship was bound for Havana, where the Jews hoped to finalize the required paperwork.

It was not to be.

Cuba denied them entry and, though they sailed close enough to see the lights of Miami, a cable by the ship’s passengers to President Franklin D. Roosevelt got no response. 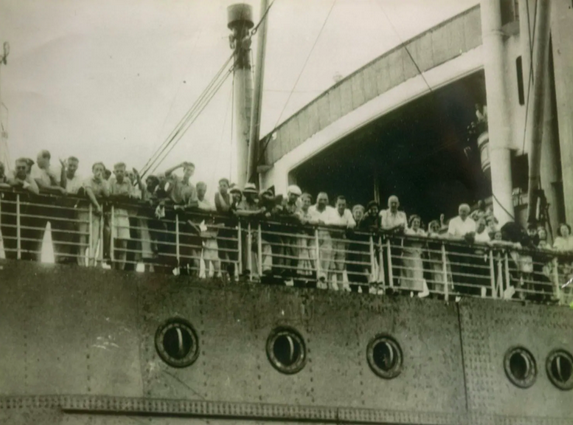 The mostly Jewish passengers aboard the St. Louis as they tried to seek asylum from Germany. (Photo courtesy Henry Blumenstein)

The ship turned back to Europe, where 254 of the passengers perished in the Holocaust, according to the U.S. Holocaust Memorial Museum.

Just three weeks before Kristallnacht, the Katzenstein family fled their hometown of Eschwege, southwest of Berlin, and a three-hour drive to the border with Holland.

“We had a wonderful life in Germany, but then it all stopped,” said Ludwig Katzenstein, who had just celebrated his bar mitzvah. Hitler “took every joy out of life. He forbade the Jews to do anything. We had no breathing room.”

Now 94, Katzenstein still remembers leaving “everything you grew up with.”

Shepherded by his parents, they boarded a train bound for Holland. But when they reached the border, the Gestapo demanded to see a red “J” on their passport that identified them as Jews.

The law requiring a red J had been issued one day earlier.

“When the law came out my father went to the authorities and they said ‘Mr. Katzenstein, we don’t have any information yet. The law just came out yesterday.’ ”

The Gestapo took the family off the train and into a border jail cell.

“We were nice people, but we were criminals for being Jewish,” Katzenstein said. “Finally, my father was able to get the red J added to the passport. So, they let us go.”

By then it was evening, and the Queen Mary was waiting in Cherbourg, France.

In an era when the annual wages were less than $2,000, a transatlantic passage on the Queen Mary cost about $535 for first class and $167 for a third class cabin. Jewish groups outside of Germany were able to offer subsidies to some refugees.

“My father,” Katzenstein said, “asked the train master to call the captain of the Queen Mary and tell him that four people who were held back by the Gestapo at the border. There were 1,000 people [already] on the Queen Mary. My father asked to wait until four people got there. That captain waited for six hours. He saved our lives.” 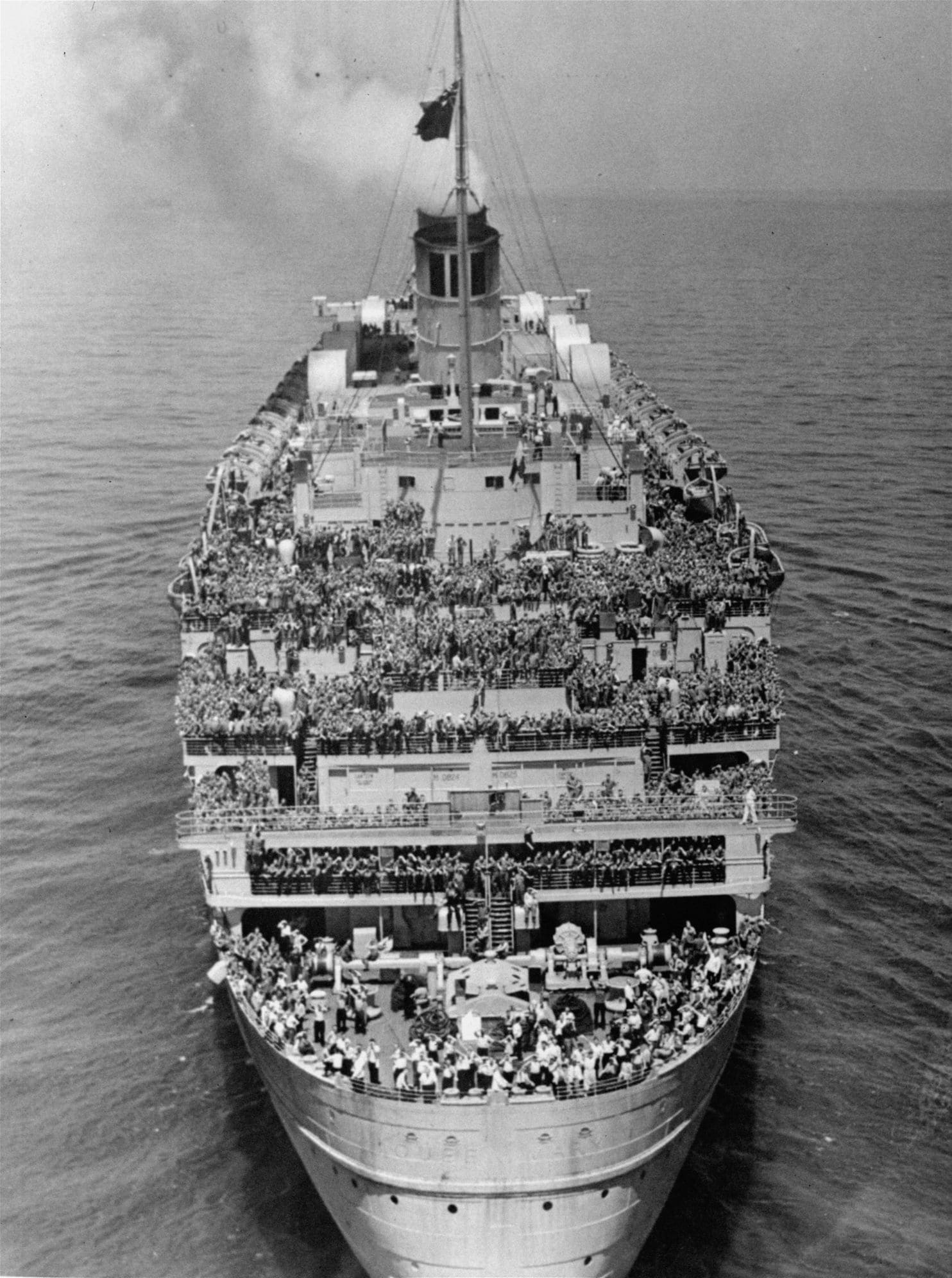 American and Canadian troops pack the aft decks of the Queen Mary as she steams into New York harbor in 1945. (AP Photo)

That captain, Robert Irving, had gained glory as a “World War I pinup” when he commanded the light cruiser HMS Yarmouth during the Battle of Jutland. Katzenstein called his later decision to weigh the lives of four people against 1,000 passengers and the Cunard line’s reputation for on-time performance “a miracle.”

“It was clearly a personal decision. He wouldn’t have been instructed to do that,” one of Irving’s nephews told the BBC. “It shows a lot of, in my view, considerable humanity.”

As trans-Atlantic shipping began to recover from the Depression the Queen Mary and other ships began to cater to religious groups who used them.

“We ate kosher on there, and they had a synagogue. We had services in that synagogue, and on Shabbat they had special services. It was just wonderful,” Katzenstein recalled. “When we got to New York I felt like not getting off.”

Tennenbaum, the little boy in the round sunglasses, had grown up in Vienna, which Hitler swept into with a hero’s welcome in March 1938. Before that, though there was a thick vein of anti-Semitism, the Tennenbaums led “a good life.”

“They knew how to live in a city that was basically anti-Semitic,” said Tennenbaum, an architect who later helped the Rouse Company develop Columbia, Md., where his house now sits. (Tennenbaum edited the book Columbia, Maryland: A Fifty-Year Retrospective on the Making of a Model City.)

In Austria, both his mother and father ran separate businesses. Hers was a “Home Depot shrunk” into a storefront. His, a plywood business that had several workers.

“In 1938, when the Nazis came in, the young men who worked for my dad came in with a Gestapo guy and took over his business,” Tennenbaum said. “The said, ‘This is ours now’.”

His father kept a 1,000-page journal that now is in the hands of the Holocaust Museum. He told him how the Nazis and their henchmen robbed the Jews of the city. 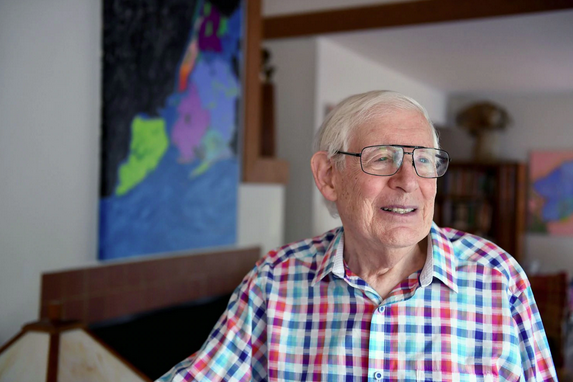 Surrounded by his artwork at his home in Columbia, Md., Tennenbaum talks about when his family fled the Nazis on the Queen Mary. (Katherine Frey/The Washington Post)

“They would put on a long leather coat, and they would tell you, ‘You owe me taxes,’” Tennenbaum said. “The time came to get the hell out of the country. I cannot imagine what they went they must have gone through just to think about leaving.”

His father had a Jewish friend who years earlier had moved to Switzerland. As Mark Tennenbaum contemplated leaving, he’d been quietly sending cash to his Swiss friend. When the time came to flee, they got visas from the U.S. Embassy, took a train to the Swiss border and were welcomed by their friend. Next came Paris, and then the Queen Mary to New York.

“The visa was nice, but you had to get an okay from the country you wanted to go to, and the United States was not very accommodating. And Roosevelt didn’t do much to help that along, either,” Tennenbaum said.

Years later, after they settled in New York City, Tennenbaum recalls that he slipped a book from his father’s library.

“It was titled ‘The Black Book’ in white letters. It was in English. I snuck the book out, read a few lines, and realized it was about the first reports coming out of Europe about the Nazi murder camps. I quickly and carefully put the book on the shelf, and never mentioned it to my father,” he said.

The subject never came up in their apartment, though his father and grandfather often “chit-chatted in Yiddish-German” that he couldn’t fully understand. One thing he recalled, however, was that their “hatred for Germany and the Holocaust lingered until they both passed away, and I’ve inherited a lot of that.”